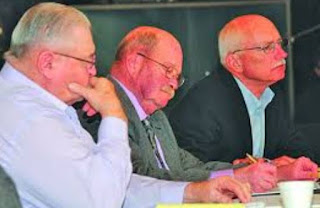 From @JaneKleeb of BoldNebraska we learn that all three Sheridan County, NE Commissioners voted to recommend renewing liquor licenses of four stores which sell the equivalent of 3.5 million cans of beer per year in Whiteclay, NE, population, 12.
South Dakota's Pine Ridge Indian Reservation, which is dry, is 24 miles away. After the hearing, Commissioner James Krotz (308 327-2110) thanked everyone for their civility. The other commissioners are Jack Andersen (308 762-1784) and Loren Paul (308 360-1397)
From the Sheridan County Journal Star:


“We have tribal laws and we do not allow alcohol. It is a dry reservation,” said Bryan Brewer, president of the Oglala Lakota County Schools school board and former tribal president. “We know what it does to our people. Yet right on the border of the state of Nebraska sells alcohol, which is tearing our people up.”
...Another testifier compared selling Native Americans beer to giving a suicidal neighbor a razor blade, noose or gun.
...Beyond the alcoholism occurring in Whiteclay and the Pine Ridge reservation, murders and prostitution also happen. Kim Greager of Rapid City, S.D. told the commissioners how people sell their bodies for five dollars to buy four cans of high octane beer. “If it was happening to white people, would you guys let this happen for so many decades?” asked Greager.

From the Lincoln Journal-Star

To be sure, the tribe needs to and has tried to address alcoholism and related problems on the reservation, but arguing that prohibition in Whiteclay would not be a step forward toward a solution is reprehensible.
In making their decision, the commissioners also ignored indisputable evidence that adequate law enforcement is absent in Whiteclay, where there has been a handful of unsolved deaths in recent years. Instead, they argued that county taxpayers shouldn’t be required to pick up the tab for more and better policing.
...The [Nebraska] Liquor Control Commission should do the right thing, what Sheridan County refused to do: Deny the licenses, shut down the stories and cut off the easy flow of alcohol onto the reservation.