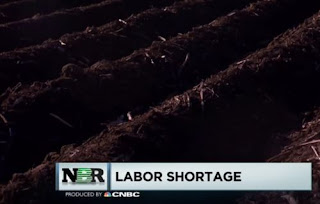 Last night's Nightly Business Report, hardly a beacon of liberal agitprop, contained several shocking statistics about how dependent the farm economy is on undocumented labor and what Donald Trump's deportation plans could do to farm production. Below is a transcript excerpt, highlighted. Go to NBR to watch the show (skip to the 21:43 mark):


...ROY: The Aiellos don`t have enough workers to harvest crops. They`re not alone. Across the country, farmers are facing a labor shortage that some are calling a crisis.
AIELLO: Of course, it`s a financial burden. You have to make difficult
decisions sometimes as far as having two fields to harvest but only being
able to harvest one of them.
ROY: Partnership for a New American Economy, a bipartisan immigration reform group, reports between 2002 and 2014, the number of full time agricultural workers has dropped by 146,000 people, resulting in a loss of about $3 billion in crop productions. And the American Farm Bureau Federation has come out with videos showing farmers forced to destroy crops or let them rot in the fields because they simply don`t have enough workers to pick them.
UNIDENTIFIED MALE: Last year, I had to do something I had never done before. Destroy ten acres of good squash.
ROY: And now, some farmers are worried the problem will get even worse if Donald Trump makes good on his campaign promise to deport undocumented workers.
DONALD TRUMP (R), PRESIDENT-ELECT: We are going to triple the number of ICE deportation officers.
ROY: More than half of the country`s agricultural workers are undocumented, according to the USDA. The American Farm Bureau estimates an immigration policy that focuses solely on enforcement could cost the country $60 billion in agricultural production...