Return of mountain lions to Black Hills is saving car insurers $630,000 per year

Mountain lions are top level predators, but they aren't the most dangerous animals in America. Deer are. They are vectors for disease. Plus, a peer-reviewed study claims your chances of hitting one are 1 in 170. If true, that means about 1.24 million collisions a year and nearly $5 billion in costs for car insurers. From a fascinating piece in Slate.


When Gilbert and her team looked at mountain lion recolonization in the western part of South Dakota, they found that from 2005–2012, deer-vehicle collisions fell by 9 percent, resulting in $1.1 million in annual societal benefits for the citizens of western South Dakota... By avoiding an estimated 158 deer vehicle collisions annually, auto insurers are already saving roughly $630,000 a year in payouts in the Black Hills.
... Livestock owners in the East will have concerns about mountain lions eating their animals. Realistically, cougar depredation happens rarely: In 2010, only 1 of out every 200 cattle that died in the U.S. that year was killed by a mountain lion. However, that will be small comfort to livestock owners who lose their animals, so insurers could establish a fund to compensate livestock owners for their losses and to help them lessen the already small chance of attacks before they happen.

Of course, some car insurance companies are indistinguishable from cougars.
Once, a woman backed into AKSARBENT's car.
When we were "interviewed" by her insurance company, Nationwide, the questions were obviously designed to establish contributory negligence on our part. (There was none; we weren't even moving.)
Nationwide made us a cheap ass offer which did not cover the damage. We subsequently discovered that the company does respond favorably to a firm communication from a good attorney. Below is the experience of a well-known jingle writer who has no more love for Nationwide than AKSARBENT does. 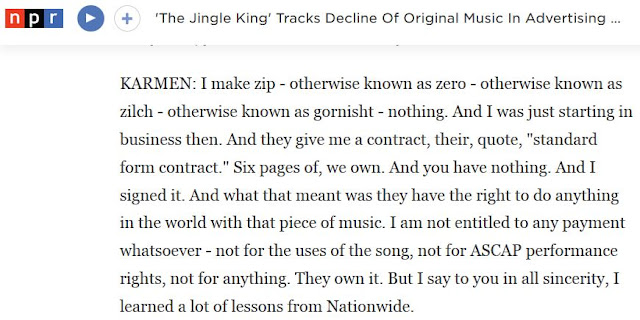