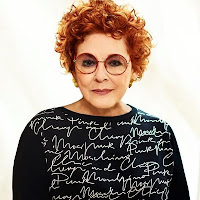 From Wikipedia: For eight years, Margo Howard (@Margoandhow on twitter) wrote the Dear Prudence column featured in Slate magazine. Dear Prudence also was featured on National Public Radio and syndicated in more than 200 newspapers. In February 2006, she left the Dear Prudence column, and began writing a Dear Margo column for Women on the Web (wowowow.com) and for Creators Syndicate. On May 11, 2013, Howard ended the Dear Margo column, announcing that she was retiring from writing on a deadline and saying, "I plan to write long-form pieces as the spirit moves me."
Howard is the only child of Julius Lederer, founder of Budget Rent-A-Car, and Eppie Lederer, better known as Ann Landers. Howard's aunt, referred to in the postscript, was better known as Dear Abby. Howard's newest book is Eat, Drink and Remarry.
AKSARBENT reprints Howard's piece, below, with the permission of the author. The photos were added by AKSARBENT.

Zsa Zsa Gabor was a pistol. I had a long interview lunch with her, many years ago, in Chicago. It was in the early 70’s. We were at the fabled Pump Room at the Ambassador East Hotel. It was … memorable. I pulled out that column just to make sure I have my facts and her quotes right.


This was my lede: “Husbands are so possessive. They always want to know who you’re dating.” At least, that had been  ZZ’s experience, which was one of the reasons she liked being single --  at that moment.  It afforded her so much more … freedom. “It’s hard, dollink, to be married.” And it was apparently hard not to be. She had been wed, in order of appearance, at that time, to “The Turk,” who was minister of Propaganda (one assumes inTurkey), Conrad Hilton ("He looked just like Daddy"), George Sanders, Herb Hutner, and Joshua Condon. (Her current husband, the phony prince, came many years later, and I think there were a few more before him.)


She told me that when she came to Hollywood, as Miss Hungary, every man was after her. It would seem that most of them caught her. She said that her “good background showed,” and that she was very beautiful – which I do not doubt. What was doubtful, however, was her age. If you believed her stated age through the years, she would have been Miss Hungary when she was 6.


She asked me if I knew she had dated JFK. I said I had not known, but what were her thoughts when he married Jackie? “Vell, dollink, she vent to ze highest bidder.” (We are getting into the pots and kettles department here, so let’s just finesse that one.) She told me that at the present time she had several “hot dates” and that Henry Kissinger was a “beau.” (The dueling accents must have been wonderful to hear.) “And then of course, there’s my big love for years, but his vife is so louzy about it!” She confided that it was Anthony Quayle.


Lest you be misled, Zsa Zsa had other interests besides men. One was money. She had a line of cosmetics named for her which she said “did fantastic.” I asked why she and so many other movie people were in the cosmetic and perfume business. “Because it’s a license to steal, dollink.” And on one of her fingers was yet another source of income: a huge imitation diamond which she also endorses. “Dimonaire pays me 2% on all their sales for wearing their things. If you write a couple good words about them I’m sure they’d zend you one.”


She did actually once make it to Broadway when she played the lead in “Forty Carats,” replacing Julie Harris, and played it in a few touring companies. She pooh-poohed the notion that she was playing herself. “Zome people say zat, but it’s not true. She’s a real estate broker with no jewelry or nothing.” She told me she was the highest paid stage actress in the world. I let that one ride. And just then the highest paid stage actress in the world was presented with the check. “Who’s going to take care of this?” she asked. I said of course the reporter pays.
__________________

There was a postscript to this interview. When the column ran, she didn’t care for it, and made it known to my mother’s twin sister when she encountered her at a party in Beverly Hills some weeks later. “Vich vun are you, dollink – the vun vit the bitchy daughter what writes?” And my aunt, bless her, said, “No, I’m the one with the bitchy daughter who does other things.”
So here’s to you, Double Z. You brought a lot of flash and glamour to the scene, and God knows, entertainment.