The birdie was a baby Blue Jay which fell out of a tree and was flailing in a pond. AKSARBENT's grandmother also liked Blue Jays; one really liked her back because she would let it drink good Scotch out of her glass on the deck. 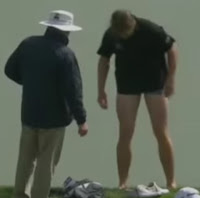 Golfers who remove their pants in public are an important world phenomenon that AKSARBENT will continue to monitor assiduously. Lest you think us trivial, know that Glenn Beck also takes this very seriously.
We last wrote about this in 2013, when adorable Danish golf pro Andreas Hartø, competing on the 14th hole in the European Tour's Trophée Hassan II tournament, dropped his pants to chip from the water rather than taking a drop.
Posted by Enzo