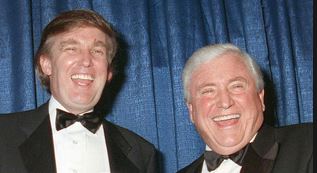 In 1988, entertainer and hotelier Merv Griffin used the courts and a well-timed tender offer to break up a Trump Resorts International deal, despite the fact that Trump was then worth ten times what Griffin had.
Nina J. Easton, of the Los Angeles Times, described in hilarious and informative detail the financial details of how Griffin backed Trump so far into a corner that he had to negotiate.
Griffin ended up with five hotels and two casinos, including the Bahamas properties he really wanted, and a beautiful house and yacht that Griffin (not a detail man, like Trump is) was flabbergasted to discover were part of the deal. Trump got the infamous Taj Mahal.
What AKSARBENT found fascinating is how the cheerfully lethal Griffin unflappably handled Trump's bluster:


...Trump shakes Griffin's hand and guides him to the window to show off his latest acquisition--the [800-room] Plaza Hotel... "Gee, Donald," Griffin says, interrupting Trump's description, "that's how many rooms you're going to need to house all the lawyers it will take to fight me."
...After what Griffin describes as some "saber rattling" by Trump, Griffin finally asks, "Are you finished?" Griffin's own net worth is $300 million, he's got plenty of cash on hand and his own battery of lawyers. And unlike Trump, he has the luxury of time on his side. All of which Griffin points out to Trump.
..."I had no impression of him," Griffin recalls. "He's far better known on the East Coast than the West Coast. This was just about the time his book came out. I read it and thought, 'Now I know how to go after him. Thanks for the book!' "
...Michael Nigris, president of Griffin Co., returns to Griffin's suite at the Helmsley to tell him everything is settled; he can purchase Resorts International for $295 million. "Shhh!" Griffin says as he sits in front of the TV, his eyes glued to "Wheel of Fortune." "That woman just won $36,000--now that's real cash!"

The insult-wielding Trump had nothing on Griffin in PR. Griffin could trash-talk too, if needed, but with a fun spin that then escaped The Donald.


"His first words when he heard I was bidding against him were: 'You mean that band singer?' Now I had left Freddy Martin's band in 1952, and this was in 1988!"
He added with a twinkle in his eyes: "The press came to me and asked, 'Are you going to answer him back?' I said, 'No, just tell him to behave himself or I'll go around Atlantic City and take the T off his name.' That infuriated him."

In 1990, Marvin Roffman, then an analyst for Janney Montgomery Scott, told the Wall Street Journal he thought the Taj Mahal, Trump's signature Atlantic City casino, would fail. (Eventually, the casino filed for bankruptcy).
Furious, Donald Trump faxed a threat to Roffman's bosses demanding an apology or his firing (all spelling verbatim, including that of the invented word "definity"):


“For Mr. Roffman to make these statements with such definity is an outrage. I am now planning to institue a major lawsuit against your firm unless Mr. Roffman makes a major public apology or is dismissed. For a long while I have thought of Mr. Roffman as an unguided missle.

Days later, Roffman was fired. He sued his employer over his dismissal and won. He also sued Donald Trump for "libel and slander" — and won. 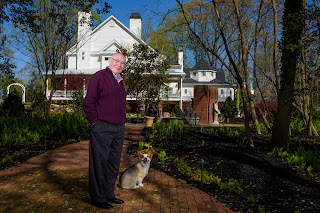 
“I’m not promiscuous at all,” he told me. “I have a 30-year relationship. They just tried to make me feel uncomfortable. But I wasn’t going to back down.”

Though terms of Roffman's settlement are sealed via a confidentiality agreement, he now lives in a lovely home in Rehoboth Beach, Delaware, with forty rooms, eleven fireplaces, four pianos, a wine cellar, a movie theater, an elevator, a closet with 500 very nice shirts and lots of expensive antiques.
Posted by Enzo