Three-time Olympic gold medalist, Australian swimming great Grant Hackett, who won the 1,500m freestyle at both the 2000 and 2004 Olympic games, was removed from a Virgin Airlines plane earlier this month after he allegedly squeeze the nipple of a male passenger, Martin Slobodnik, in a disagreement over Martin's seat reclining. Hackett was questioned by Australian federal police but hasn't been charged.


“I can still feel his hands groping. I still feel violated,” said Sydney-based real estate agent Martin Slobodnik to the The Herald Sun. after being identified by The Australian. 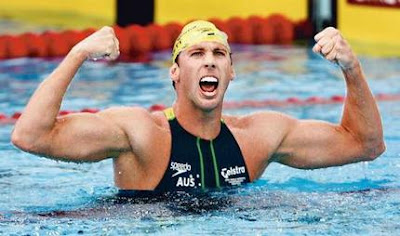 Hackett's version of the incident:


“I got on the flight, a gentleman put his seat back, I said, ‘Would you mind putting it up?’
“I offended him, I had no intent to offend him inappropriately and from there the rest is history,” Hackett said today.
“I don’t want to get into a he said, she said situation...

“Did I mean to touch him inappropriately? If I did, I am very sorry, I didn’t mean to, I didn’t mean to offend him.
“It was not my intent at the end of the day and for me I have spoken to the gentleman and his partner who were sitting in front of me, apologised to them profusely if in any way I did offend them and had a good chat with them.

Hackett later said he plans to quit drinking and intended to get professional help to stop drinking in order to set a positive example for his children.
Fellow passenger says Hackett was pretty much passed out during the flight and not aggressive.
Days after the flight altercation Hackett admitted himself to Pindara Private Hospital with a serious mouth infection: uvulitis, a severe swelling of the uvula tissue that hangs from the back of the throat.
Posted by Enzo