On March 11, 2016, USA Today published a database reporting story which revealed that in the last four years, 2000 water systems in all 50 states have had excessive levels of lead contamination. The EPA's limit is 15 parts per billion, but the agency says there is no safe level for lead exposure. Below are 13 examples of excessive lead contamination in Nebraska. USA Today's complete report is here.

First, there was this:

Obviously, water systems near Lincoln and other parts of Nebraska distant from Omaha are not part of M.U.D. But contrary to M.U.D.'s false insinuation that they are private, several are, in fact, public.

Then there was this: 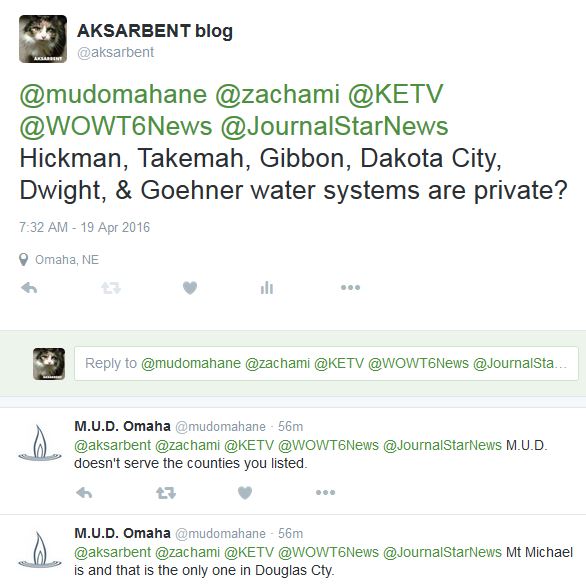 Well, M.U.D. does serve Douglas County, even if Mt. Michael's has its own, private well.

We think what M.U.D. was trying to say was:

"We would like to clarify that although M.U.D. provides water throughout Douglas County, Mt. Michael uses a private water supply which does not come from M.U.D. We think your "Public Water Supply" column title might lead to some confusion."

That would have been a valid criticism of USA Today's labeling (which AKSARBENT used) and would have avoided further confusing the issue.
If M.U.D. doesn't know how to get around twitter's 140-characters tweet limit by making a screencap of a paragraph in Microsoft Word, AKSARBENT would be happy to demonstrate, provided whoever runs their twitter account is be willing to take a remedial course in business English taught by someone who could foster some attention to clarity in the utility's social media statements.