Iowa's House has passed an unconstitutional bill to punish groups boycotting Israel. Who voted for it?

First, know that the Iowa ACLU, which isn't under the thumb of the government of Israel or anyone else, opposes the companion senate and house bills, saying:

OPPOSE SF 2281 and HF 2331 Unconstitutional Prohibition
on Contracts With Businesses That Boycott Israel
Senate File 2281 would prohibit Iowa government agencies and retirement systems from entering into contracts with businesses that boycott Israel. Similar legislation (House File 2331) passed the House on February 22. The ACLU of Iowa opposes these bills.
A boycott is an important and powerful form of expressive association protected by the First Amendment. Speech in support of a boycott encompasses the practice of people sharing common views banding together to achieve a common end, a practice deeply embedded in the American political process. By this collective effort, individuals can make their views known when, individually, their voices would be faint or lost. The Supreme Court has held that economic boycotts are protected by the First Amendment. *NAACP v. Claiborne Hardware Co.*, 458 U.S. 886 (1982).
In addition, the government cannot punish its contractors based on their political beliefs,associations, and activities. For example, in *O’Hare Truck Service v. City of Northlake*, 518U.S. 712 (1996), the Supreme Court held that a city violated the First Amendment by firing a contractor in retaliation for its refusal to support one candidate and its support instead for another candidate. The Supreme Court explained: “If the government could deny a benefit to a person because of his constitutionally protected speech or associations, his exercise of those freedoms would in effect be penalized and inhibited. This would allow the government to produce a result which it could not command directly.
Such interference with constitutional rights is impermissible.

SSB 3087/HSB 583 [now known as H.F. 2331 and S.B. 2281] would create a blacklist of companies, organizations, and entities that boycott Israel, and would prohibit Iowa from contracting with or investing in blacklisted entities.
Twenty-two states have now passed similar laws or resolutions. Below are the names of the 70 Iowa representatives who attacked free speech in order to run interference for a foreign government.
Don't live in Iowa? Find out where your state stands on this issue here.
There is a "Buycott" app for Apple and Android users who do not wish to purchase goods made in Israel or in occupied areas of Palestine. 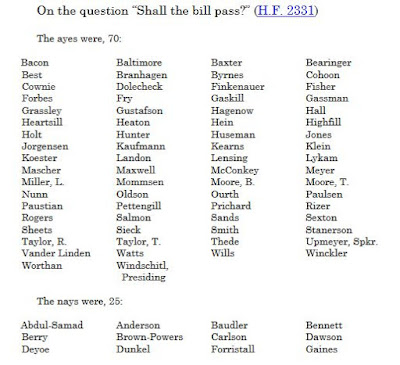