Well known is Hillary's duplicitous and covert help as Secretary of State to TransCanada in pushing Keystone XL as she issued an EIS and Supplementary EIS so flawed that both were contradicted by the EPA. State Department cables released by now-imprisoned Chelsea Manning revealed the shocking extent of her perfidy.
We know about her support of NAFTA and TPP.
We know about her insulting email railing against changing passport forms to Parent 1 and Parent 2 to accommodate same sex couples, her bizarre defense of the Reagan administration's unbenign neglect of the HIV/AIDS epidemic and her recent string of refusals to grant interviews to LGBT media.
We know about her promise to "look into" releasing the transcripts of her $200,000+ per pop speeches to the out-of-control Wall St. behemoths she insists that she'll bring to heel as president.
But how often is she asked to explain the consequences of her wayward warmongering? 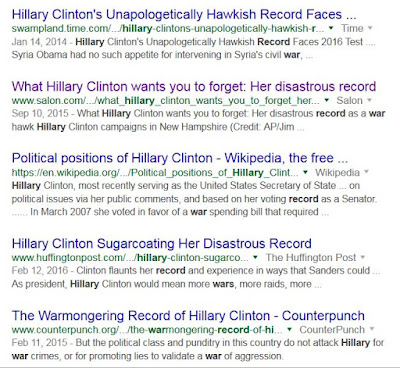