Hillary issues a second, long-form apology for bizarre claim that Reagans were in forefront of HIV/AIDS fight

Hillary's first apology was direct, but terse and oblique.

Hillary Clinton’s statement on her comments about the Reagans' record on HIV and AIDS: pic.twitter.com/RtIs0zpJfk
— Hillary Clinton (@HillaryClinton) March 11, 2016

Today, she walked her statements way, way back. Although AKSARBENT prefers Bernie Sanders to Clinton, we have to say Hillary didn't beat around the bush and no politician could have handled an incredibly stupid remark any better. Click the link in the tweet below to read her full statement. If she was misinformed before, she sure isn't now.

A note on the fight against HIV and AIDS—and the people who really started the conversation. https://t.co/7nT47FqDep
— Hillary Clinton (@HillaryClinton) March 13, 2016


How could she have pulled such an incredible boner? Here's one explanation: 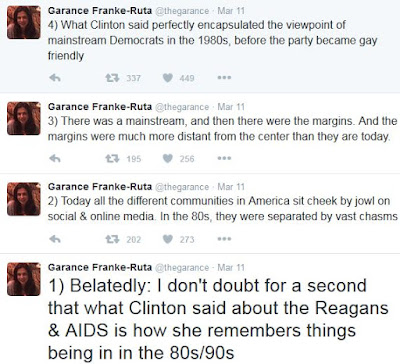 Below are a couple of reminders of how Ronald Reagan and his wife really behaved in respect of HIV and AIDS. One should also remember that when an appeal was made on behalf of Rock Hudson to make an overture to the French government to have him treated in a French military hospital with cutting edge HIV procedures (which wouldn't have helped Hudson, as it turned out), Nancy Reagan personally nixed the idea, purportedly because it would have appeared unseemly for the Reagans to have officially favored a friend, even though AIDS-afflicted Roy Cohn somehow was mysteriously able to jump the NIH's AZT clinical trial line and it is well-known that the Reagans were not averse to intervening on behalf of old friends even after they became ensconced in the White House.


“Seems strange that the Reagans used that excuse, since they often did favors for their Hollywood friends during their White House years,” Staley told BuzzFeed News, pointing out a time when President Reagan personally intervened to assist a fundraising effort led by Bob Hope, as detailed in a biography of the entertainer. “I’m sure if it had been Bob Hope in that hospital with some rare, incurable cancer, Air Force One would have been dispatched to help save him. There’s no getting around the fact that they left Rock Hudson out to dry. As soon as he had that frightening homosexual disease, he became as unwanted and ignored as the rest of us.”