ABC explains what the bill did:

House Bill 2 declares that state law overrides all local ordinances concerning wages, employment and public accommodations.
Thus, the law now bars local municipalities from creating their own rules prohibiting discrimination in public places based on sexual orientation and gender identity. Though North Carolina does have a statewide nondiscrimination law, it does not include specific protections for LGBTQ people.
The law also directs all public schools, government agencies and public college campuses to require that multiple-occupancy bathrooms and changing facilities, such as locker rooms, be designated for use only by people based on their "biological sex" stated on their birth certificate. Transgender people can use the bathrooms and changing facilities that correspond to their gender identity only if they get the biological sex on their birth certificate changed. 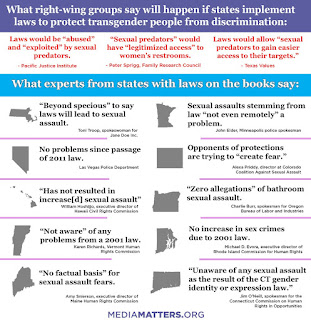 Supporters of the recently passed legislation have cited the debunked "bathroom myth" — that transgender non-discrimination laws give sexual predators access to women's restrooms, according to Media Matters for America, a nonprofit progressive organization.
As Republicans have taken over the state legislature, progressives have looked to use local city governments, that lean left, to enact change. The bill passed by the state legislature on Wednesday is an effort to preempt these local governments, reports The Atlantic.
Corporate America is not happy with North Carolina's new law or a similar one proposed in Georgia: 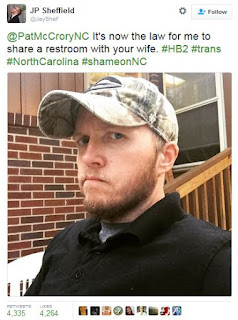 Here in Nebraska, antigay right-wing organizations like the Nebraska Family Council and Family First (now merged into the Nebraska Family Association) have induced women supporters and husbands to tell officials at hearings how frightened they are at the prospect of men being able to claim they are transgender simply for the purpose of following them into restrooms, an imaginary scenario for which they have never cited any evidence.
Instead, they want people to use restrooms which correspond to the gender of their birth certificate, a policy that is transparently ridiculous — as the tweeter at left illustrated.
Posted by Enzo