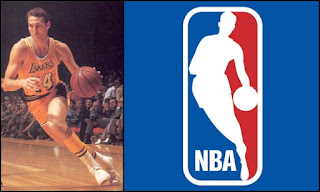 Laker Jerry West (right), the unacknowledged model for the NBA's logo, wore high, tight shorts which gave way in the 90s to 20 years of ultra-baggy, loose-fitting replacements.
Now the worm has turned; the Washington Post reports that younger players are rolling up waistbands or putting on newer, briefer styles.
Interestingly, there are on-court disadvantages to wearing shorts which seemingly allow more freedom of movement but often don't:


“Those uniforms were never built for the athlete’s body,” said Nguyen, who added he believes basketball shorts will never grow as baggy as they once were. “It was almost contrary. If you see that from an aerodynamic perspective, those uniforms aren’t really conducive. It’s not aerodynamic at all. And now the fashion, for the last few years, really, has been going to the slim[-fitted]. It’s suiting. It’s jeans. Even for hip-hop guys.”
Some players attest to making the switch for practical reasons. In 2011, Will Cummings, then a freshman guard at Temple, began rolling up his extra-large shorts simply because they were too big on him. They settled above his knee, and he quickly grew accustomed to them. The following year, he downsized to a large but still rolled up his shorts.
“I really was just thinking, ‘Man, if I’m able to do a crossover through my legs without the ball hitting my shorts, I’m going to keep it like this,’ “ said Cummings, who now plays for the Rio Grande Valley Vipers of the D-League, the NBA’s minor league. “It didn’t even matter. I was just trying to get my shorts shorter so I can play.”