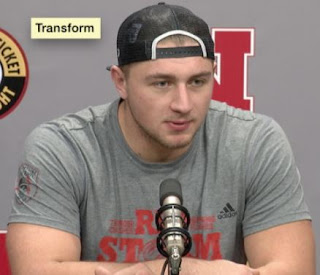 This is different. No, not Big Red's downward spiral in college football, but the attitude of Alex Lewis, one of six Husker co-captains this year, who takes the game in stride (Former powerhouse Nebraska is 2-3 this season.) Coach Riley is scheduled to talk to Lewis about his behavior.
Maybe he should talk to his assistant coaches about their behavior. At least Lewis is now only blowing kisses, which was not what he was doing two years ago:


On May 11, 2013, the former transfer from Colorado and a fellow CU teammate were involved in an altercation in Boulder, Colo., that left one man unconscious. Lewis was convicted of misdemeanor assault and sentenced to 45 days in jail, though it was delayed until last summer so he could complete his spring classes.

The Lincoln Journal-Star is worried that Lewis's sarcastic gesture was disrespectful to Nebraska fans. (Regarding that, one can almost hear the laughter from the office of former Nebraska Coach Bo Pellini in Youngstown, Ohio.)
The account we read, at CollegeSpun, was written by Andrew Holleran. No, not that Andrew Holleran, who wrote this novel which is being made into a movie.