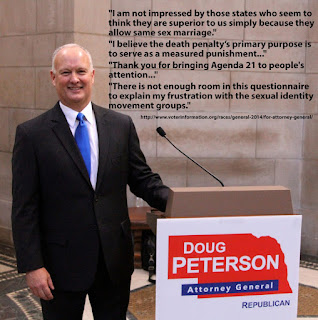 Even the U.S. Supreme Court has not ended Nebraska Attorney General Don Peterson's scorched earth policy toward LGBTs in the state. He has spent freely to stall gay marriage in Nebraska, forcing a dying woman to sue Nebraska, spent freely to support efforts by Texas Attorney General Ken Paxton (now under indictment for securities fraud)  to cut off family medical leave for legally marriage gay couples, and now he's spending even more to ensure the folks he forced into suing for their rights cannot recover legal costs after the Ricketts administration's complete failure to stave off what has been obviously inevitable since last year's Windsor decision: equal treatment of LGBTs in the granting of civil marriage licenses.
From SCOTUS BLOG:


Couples who sued in many states are now pursuing further orders, including an award of lawyers’ fees.  In response, Nebraska’s lawyers have now gone further than other states have, seeking en banc review of the dispute by the U.S. Court of Appeals for the Eighth Circuit.
A three-judge panel of the Eighth Circuit on August 11 rejected Nebraska’s argument that the Nebraska case, Waters v. Ricketts, was now moot and should be dismissed without a final order in the couples’ favor.  The panel said that the Supreme Court had only struck down four states’ bans specifically — not including Nebraska’s — and did not rule on any couples’ right to state benefits that go with marriage.  Like other couples, the seven couples in that state had sued not only to get the chance to marry, but to gain its benefits.
While noting that state officials had assured the Eighth Circuit that they stopped enforcing that state’s ban as soon as the Supreme Court had ruled, the panel said the state had not yet “repealed or amended” its ban.  “Nebraska’s assurances of compliance…do not moot the case,” it declared...

Nevertheless, Peterson now wants an en banc review of the three-judge, Eighth Circuit panel's rejection of his arguments, meaning that he wants to waste the time of eight judges, not just three.
And you'll be footing part of the bill for Peterson's never-say-die, money-is-no-object, radical right wing agenda, Nebraska taxpayers.