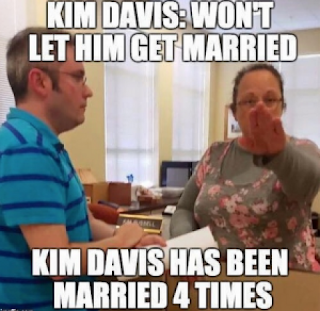 Another poster child for Ted Cruz's ginned up pandering on the phony issue of religious freedom for bigots who refuse public accommodations to gay customers.
In Rowan County, Kentucky, Clerk Kim Davis' case, it's not gay customers, it's gay (and now straight) citizens and taxpayers, since she runs a public office as a personal religious fiefdom in the manner she sees fit, the U.S. Supreme Court and the State of Kentucky be damned.
Davis doesn't approve of the Supreme Court ruling that refusal to grant marriage licenses to gay couples is a violation of the equal protection clause of the U.S. Constitution and she has decided to make Rowan County taxpayers pawns of her pettiness.
From Towleroad:


The Rowan County Attorney’s Office has filed a charge of official misconduct against clerk Kim Davis for her repeated refusal to issue marriage licenses to same-sex couples despite a federal order.      The Morehead News reports County Attorney Cecil Watkins said the Rowan County government and his office had no other action against Davis.
“No authority exists for her removal or suspension from the office by Rowan County government,” said Watkins. “Kentucky State Government is the only entity that can move to have Kim Davis removed as Rowan County Clerk.”
The charge has been referred to the Attorney General’s Office. The county attorney’s office is prohibited from prosecuting Davis because they are involved in current litigation with Davis.

The Lexington, Kentucky Herald Leader is fed up with Davis's imperious antics and takes conspicuous note of the fact that Davis worked in her mother's office for 27 years before being elected to take her place and that her son now works there as well. Nepotism, anyone? The paper eviscerated Davis and her Liberty Counsel misbehavior enablers in two scorching editorials here and here.