The Washington School, chartered by the Joint Chiefs of Staff, has raised eyebrows among some at the State Department and among lawmakers for its questionable due diligence in vetting instructors.
One teacher, Carlos Alberto Ospina Ovalle, was linked to Colombian killings and another, Garcia Covarrubias, was accused of torture and beatings under Pinochet.
From the Daily Beast / Center for Public Integrity: 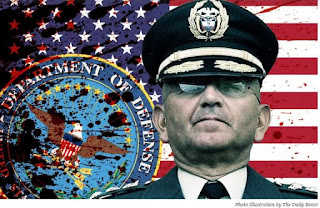 The NDU’s Center for Hemispheric Defense Studies, where Ospina taught from 2006 to 2014 before moving to another academic center at the university’s campus in Washington, D.C., has itself been rocked by controversy in recent years. A nonpublic report in 2012 by a U.S. Army colonel, appointed by the center’s director in response to persistent staff complaints, concluded that “a hostile work environment exists”; that its staff had displayed “a lack of sensitivity towards the use of derogatory language”; and many employees felt its leaders routinely retaliated against those who questioned them.
The report, obtained by CPI under the Freedom of Information Act, depicted a sort of frat-house atmosphere at the center. It stated that staff had exchanged “racially charged emails”—including one directed at President Obama; used offensive language such as “faggot,” “buttboy,” and “homo”; and that “women employees feel that they are treated inappropriately.” Even senior leaders used “inappropriate hand gestures,” it said, and mentioned simulations of masturbation.