Aside from the bad science implicit in the message, there are a couple of other lies on the billboard: the "twins" are actually two photos of the same guy, and (h/t JoeMyGod) he's happily gay:

About the ad's pseudo-science: substitute "left-handed" for "gay" and the innate stupidity of the billboard comes into sharp relief. People are already complaining to the company pocketing money for the ad, Lamar Advertising. 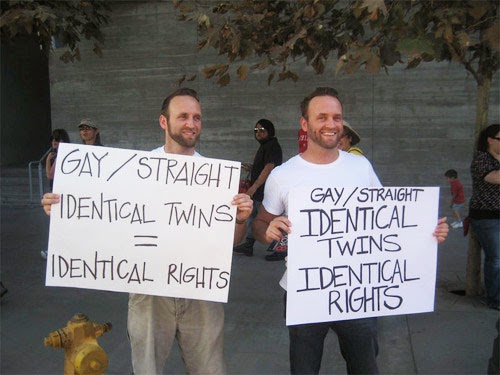 Sadly, not all the deniers who assert that sexual orientation has no genetic component are civilians.
Lincoln psychologist Dr. Edward Stringer, who has repeatedly lobbied against legal measures which would give LGBT Nebraskans legal recourse when subjected to arbitrary discrimination and who "treats" homosexuals who want to become heterosexuals, asserts in the video below that "sexual orientation by its very nature is highly fluid."
Stringham cites a Dr. Edward Laumann of the University of Chicago, who Stringham claims has said that over half of those who profess it, eventually "spontaneously exit homosexuality."
"Homosexuality is 0% genetically inheritable, according to the Human Genome Study," Dr. Stringham boldly claimed, without verifiable attribution, to the Lincoln City Council. "That's just one example of the so-called pseudo science that we've been given today."
Here's what Dr. Francis Collins, respected geneticist and head of the Human Genome Project, actually said about the subject, after having been misquoted before by the ideological ilk of people like Dr. Stringham of Lincoln, Nebraska:


The evidence we have at present strongly supports the proposition that there are hereditary factors in male homosexuality — the observation that an identical twin of a male homosexual has approximately a 20% likelihood of also being gay points to this conclusion, since that is 10 times the population incidence. But the fact that the answer is not 100% also suggests that other factors besides DNA must be involved. That certainly doesn’t imply, however, that those other undefined factors are inherently alterable.