KMTV's morning peroxide pundit wants you to know that the feds REJECTED 'Redskins' complaint; also,
did you know that FOUR tornadoes hit Pilger? 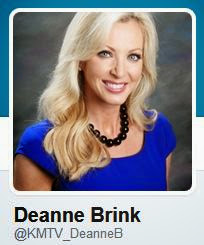 This morning, Deanne Brink reported a story on the reconstruction of Pilger, NE after "a pair of twin tornadoes leveled the town."
We don't know whether she wrote this idiocy or just read it, unfiltered by common sense, from a teleprompter, but whatever the cause, it aired at least twice thrice this morning. (We certainly hope the segment was played repeatedly and that she didn't actually read it that way multiple times.)
When she's not intoning dumb narrations on KMTV, a CBS affiliate, Deanne apparently likes to slyly promote the ultra-right-wing competition by retweeting drivel from Fox and Friends (of Saturday Night Live fame) where the denizens are VERY EXCITED that the FCC has REJECTED a complaint about the racist name of D.C.'s pro football team. 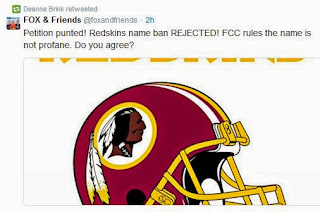