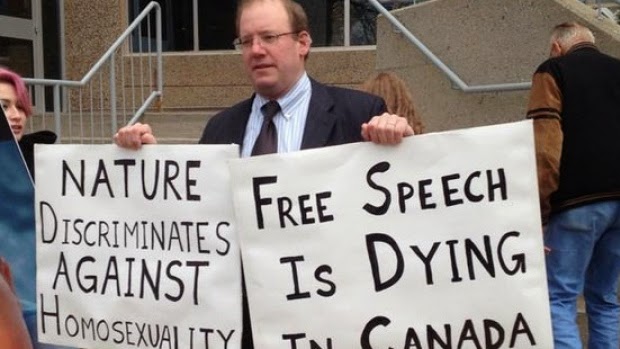 In April, Barbera and fellow antigay activist Bill Whatcott were asked to leave the University of Regina for contravening the U of R’s respectful workplace policy in their demonstration against "homosexualism."
We at AKSARBENT find his sign far more interesting than his predictable insistence that he is being victimized by Big Gay or Liberal Academics or Political Correctness or whatever.
The placard, "Nature discriminates against homosexuality," demonstrates why he should probably be barred from institutions of higher learning simply for spreading stupidity.
Barbera is so dull that his arid, rock-strewn mind seems not to have noticed that homosexuality is maintained by nature in hundreds of species despite the glaring fact that it is the trait least likely to be passed on through reproduction.
Example: 7-9% of domestic Bighorn rams will have nothing to do with ewes, to the eternal consternation of ranchers. This incidence of homosexuality crops up in generation after generation — in fact, homosexuality is more prevalent in male sheep than in male humans.
Obviously, rather than discriminating against homosexuality, nature is working overtime to preserve the condition (despite — or perhaps because — of its serious reproduction handicap) a fact Barbera is either too vacuous to notice or too dishonest to acknowledge.
Perhaps Barbera thinks that sheep homosexuality is learned behavior passed on by queer rams at secret pasture meetings or wild-and-woolly gays-only sheep meadows or during ruminant raves in the highlands.
Posted by Enzo