NOM posts a Cindy Golding video on its blog — and lies about its contents. Then it tweets the wrong Cindy Golding 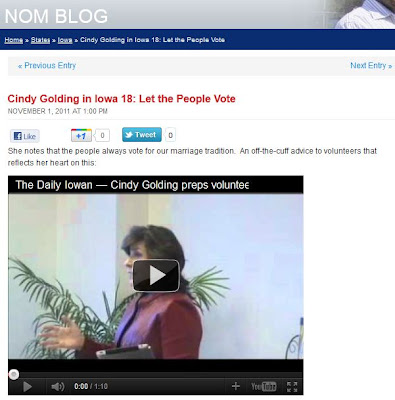 Today, Lynda Waddington of the Iowa Independent caught NOM in another blatant falsehood:


Thursday morning, NOM’s official Twitter account noted and its blog published a video produced by The Daily Iowan, a student newspaper through the University of Iowa.


The tweet reads: “VIDEO: @CindyGolding preps volunteers on how to answer questions about #SSM. #Iowa” and provides a link to the blog post. The headline on the blog post reads: “Cindy Golding in Iowa 18: Let the People Vote.” The content adds that “she notes that the people always vote for our marriage tradition.”


But, in The Daily Iowan’s video, Golding doesn’t say anything remotely similar.

If it comes up — about gay marriage — a lot of people, the media has tried to make it about that. I have said I want the people of Iowa to vote on it so that it goes away because we have a lot of political energy being spent on it. And, if you look around the country, every place they voted on it — whether they voted for or against — but once they voted on it, then the news media went and focused on somebody else. We need to get that issue resolved so that we can get on with business.

UPDATE!!! The tweet appears to have been removed. AKSARBENT assumed it was because NOM was caught lying again. But apparently it's because NOM tweeted the wrong Cindy Golding. 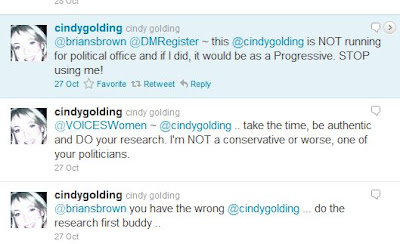