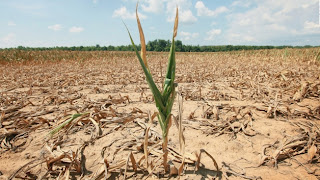 Either Deb Fischer is a willing, lying accomplice of the GOP war on science and of global warming deniers financed by right wing think tanks, billionaire industrialists and the American Petroleum Institute or she's just too damn stupid to be a US senator. Neither possibility is terribly appealing.
Evidence: her sadly ridiculous assertion at an earlier debate that she did not believe man-made pollution was linked to global climate change. (Global warming is almost universally defined as climate change caused by human activity.)
By the way, today's (October 3rd) high is forecasted to be 84 degrees. But it will be a dry heat!
Below is another video chock-full of evidence that Deb Fischer, Ameritrade Pet, will want to avoid watching in order to maintain the seamless integrity of her willful environmental ignorance:

From Rolling Stone last July, in the midst of 2012's drought:


June broke or tied 3,215 high-temperature records across the United States. That followed the warmest May on record for the Northern Hemisphere – the 327th consecutive month in which the temperature of the entire globe exceeded the 20th-century average, the odds of which occurring by simple chance were 3.7 x 10-99, a number considerably larger than the number of stars in the universe.
Meteorologists reported that this spring was the warmest ever recorded for our nation – in fact, it crushed the old record by so much that it represented the "largest temperature departure from average of any season on record." The same week, Saudi authorities reported that it had rained in Mecca despite a temperature of 109 degrees, the hottest downpour in the planet's history.