Deb Fischer, the Nebraska GOP candidate for Senate who is long on feel-good conservative bullet points and short on vision has now flip-flopped from her 2004 position on the issue of a woman's right to choose not to carry the baby of a rapist to term. (Story here.)
She also doesn't believe in Global Warming, despite the increasing regularity of weather extremes characteristic of that phenomenon, including record drought here in Nebraska.
Oh — and she underhandedly snuck in a loophole in legislation which confers eminent domain privileges on pipeline companies but not wind energy companies.
Really.
The Nebraska GOP has never made it easier to justify a vote for Bob Kerrey. 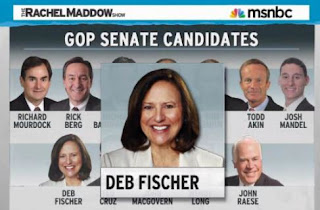