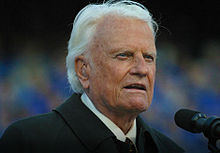 Graham's letter said, in part about the Cathys: "I've known their family for many years and have watched them grow Chick-fil-A into one of the best businesses in America while never compromising their values," Graham said.

His open letter also contains a fund-raising appeal and a notice that Graham's son Franklin, himself a major evangelical figure, is launching a new effort to "bring the Gospel into neighborhoods and homes in every corner of America next year."
Randall Balmer, the chair of the religion department at Dartmouth College, suspects the motivation for the letter is at least partly political.
"It's hard for me to believe that this letter does not have political intent," he said.
Its move to decry what he would see as moral decay "would be tied to the Obama administration," he argued, asking rhetorically why Graham would not have issued the statement in response to an event like the Abu Ghraib torture scandal.
Graham's spokesman did not immediately respond to a question about what prompted the letter.

Email ThisBlogThis!Share to TwitterShare to FacebookShare to Pinterest
Labels: Chick-fil-A