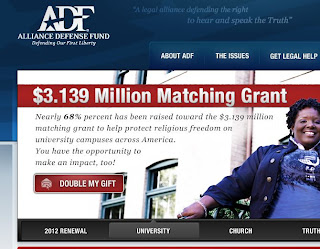 Recently, Talking Points Memo examined the corrosive effect of efforts by the Alliance Defense Fund to create huge loopholes in the effectiveness of laws designed to protect gay citizens from discrimination.


...Recently, the concept of “religious liberty” as legal loophole has gotten a degree of national attention, with state legislators in Tennessee and Michigan proposing language to exclude religious beliefs, or “moral convictions,” from state bullying laws...
The bullying laws are the most recent manifestation of a much broader effort by groups like the ADF to argue that “religious liberty” should provide cover for people who would discriminate against gays and lesbians...
The ADF is a Scottsdale, Arizona-based non-profit that was formed in 1994 by prominent members of the religious right, like the late Dr. James Kennedy, Don Wildmon of the American Family Association and Rev. James Dobson of Focus on the Family. According to its website, leaders of 35 ministries also helped form the legal defense fund...[According to ADF's web site] it currently has over 150 ongoing litigation cases, and on average wins “more than three out of every four cases brought to conclusion.”
Primarily, the ADF’s funding comes from private donations — including mainstay right-wing donors like the Bill and Berniece Grewcock Foundation, which, according to Media Matters, had contributed at least $100,000 to the ADF as of 2009. According to its site, the ADF has spent $35 million funding cases all over the country since 1994. In 2009, the ADF even offered free legal representation to county recorder offices in Iowa who refused to issue marriage licenses under the state’s new gay marriage law because of “rights of conscience.”

Email ThisBlogThis!Share to TwitterShare to FacebookShare to Pinterest
Labels: ADF