AKSARBENT found this provocative conspiracy theory video courtesy of the tin foil-capped paranoiacs at CBS News. (Scroll down to "other" Occupy developments, then find Nashville.) 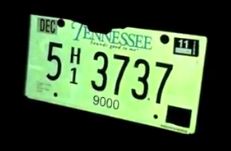 A mysterious van is illegally parked—with motor running—outside the Hilton Downtown Hotel in Nashville on Nov. 17, 2011, where Occupy Nashville protesters shamed Donald Rumsfeld as a war criminal both outside the hotel and inside the elite dinner, where Occupy protesters heckled the former defense secretary.
The van's windows were blacked out except the front, and there was a curtain that wouldn't close all the way. There were obviously TVs and computers inside. The van was marked externally as "NES," with the Nashville Electric Service's phone number. But a call to NES confirms that all their vans have unique ID numbers on them.
So the protesters called Metro Police, who responded to the suspicious call.
When police became inquisitive, the mystery man flipped off the protesters and sped away.
Is this what covert surveillance looks like?