Don Bacon at town hall: FRC not an antigay hate group. Southern Poverty Law Center: they've been one for decades

So one of our friends went to see Ben Sasse at his town hall and discovered that it was really a Don Bacon town hall. We're surprised that, at 8:30 on a Saturday, he was able to find the venue at all.
When he showed up with his camcorder, Bacon's Communications Director asked him who he was "with." He didn't like that, so he gave us a copy of the video he took. HE'S WITH AKSARBENT NOW, DON BACON!
Our attention was got when the very first constituent question Bacon fielded was about his scurrilous association with the antigay Family Research Council, which gave Bacon a small, cheap-looking trophy for good behavior in 2017. We figured Bacon's questioner must have been gay hisself to have been so incensed, but our spy found out he has a very pregnant wife, so, no.
This must be a nightmare for poor Don. His buddy, Tony Perkins, is now so radioactive than even heteros are starting to yell at Bacon in Middle School auditoriums.
Anyway, Don upbraided "Mark" for calling the Family Research Council (FRC) a hate group:


There's people who have Christian faith, traditional Christian faith, and those who disagree with them... You're trying to say Christians should be hated. And that is wrong... We should also be able to have the faith we also believe in and not call them hate groups, Mark.

Southern Poverty Law Center doesn't care if you call the  FRC a hate group, Mark. It has, since 2010:

If you find the SPLC's facts about the FRC disgusting, you certainly won't want to read what the HRC says about it.
Rep. Don Bacon believes that a D.C. pressure group that has been engaging in class slander for decades is owed civiilty and should not be called what it obviously is. You can believe that if you like.

Randy Rainbow just topped himself again, so to speak. How long can he keep it up? 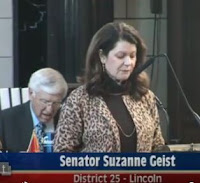 Senator Megan Hunt (at 19:30) was pissed. "So saying you oppose this because you believe you're concerned about small businesses is bull hockey. Saying you oppose this bill because you support small businesses is really a joke... It makes me think that you think... Nebraskans are really fools. This is not going to be forgettable for me. Because this is personal... I'm going to remember... So I'm going to remember where some of you were on employment nondiscrimination when you want my vote on things."
At 22:39, Senator Joni Albrecht speaking on behalf of the right of employers to fire people solely because they are gay, cited a survey claiming Nebraska (notorious for low wage jobs) is 4th in the nation as a state "where you would find good-paying jobs."
Senator Adam Morfeld wasn't having any of the antiLGBT arguments. At or near 30:34: "This is nonsense... Stop reading the Nebraska Family Alliance and the Nebraska Catholic Conference talking points and let's have a real discussion about this. A real discussion about right and wrong, and why we want to use religion in this state as an excuse to fire people for who they are... That is sick. I'm very frustrated right now... Can there be frivolous lawsuits? Absolutely. I could go sue Senator Halloran tomorrow. I could do it today! I could walk down to the courthouse!" Morfeld then explained that if lawsuits are really frivolous, (a frequent scare tactic raised by opponents of LGBT antibias job laws) court fees and damages can be awarded.
Posted by Enzo No comments: