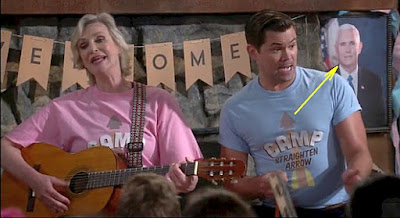 
Will & Grace was steady in its fourth week, ranking as the top-rated and most-watched scripted show of Thursday night according to Nielsen overnight data.
Airing at 9 p.m. on NBC, “Will & Grace” averaged a 1.7 rating in adults 18-49 and 6.5 million total viewers.

Glee coach Jane Lynch and Omaha's Andrew Rannells (who originated the role of Elder Price in Broadway's Book of Mormon) appeared as recently-married, allegedly straight counselors at Camp Straighten Arrow, where Rannell's character was challenged by interloper Will to a contest against his (nonexistent) Camp KickAMo. Both Lynch and Rannells are gay in life.

The germ of the episode was planted by VP Mike Pence's support of discredited, ineffective and cruel conversion therapy programs which have been outlawed in several jurisdictions when minors are targeted. Via The Wrap:


Series co-creators Max Mutchnick and David Kohan told TheWrap that their decision to introduce Skip — whose father is Jack’s son Elliot (Michael Angarano) — came about following Trump’s 2016 election win and in light of Pence’s link to so-called “gay-conversion therapy.”
“It must have come from our interest in wanting to do an episode on conversion therapy because we were already into the presidency of the game show host that’s in the White House,” Mutchnick said. “We knew it was something that was on the minds of a lot of people because the vice president was a person that believed in the barbaric practice of conversion therapy. We don’t recognize it as a form of therapy — we only recognize it as a form of torture.”