The ads come courtesy of the American Action Network, a right-wing 501(C)(4) "Social Welfare Organization."
That means it doesn't have to declare its funding sources, boys and girls. You can thank Supreme Court Justice John Roberts, et al., and Citizens United for that.
Wikipedia says:


Critics of the American Action Network have argued that the organization's advertisements contravene its requirements under its 501(c)(4) status. Malek has stated in response that such claims are "baseless"

For months, AAN has been running interference for the GOP congressmen who want to destroy Obamacare, including the 2nd district's own former Air Force Gen. Don "F-22" Pork Bacon.
Below is AAN's latest valentine to Bacon, demanding that you thank him for slashing nearly a trillion dollars from Medicaid to fund tax cuts which benefit billionaires more than any other group.
(Note: the Bacon ad airing in Omaha isn't on American Action Network's YouTube site yet, so we embedded the Paul Ryan version, which is identical, except for Bacon's name and image.)
The ads are fast-talking masterpieces of double-talk, half-truths and deception.

Here's a transcript, with our comments:

It's a bold plan to cut the deficit,


Most of all for billionaires, who don't necessarily create jobs with that tax "relief," that will come from $880 billion in cuts to Medicaid, which will force the poor into expensive emergency rooms, creating huge hospital losses, which they'll pass on to other patients.

It puts patients and doctors back in charge of health care,


Really? So why did the AMA and hospitals oppose it, along with the AARP, which represents the patients who will be most screwed by Ryan-TrumpCare?


...by redirecting penalties for not having insurance to insurance companies


...by putting people in underfunded high risk pools which cause their premiums to skyrocket

and protecting people with preexisting conditions...


...except really weird things like pregnancy, rape and acne


many of which they can't possibly afford


This is almost a total lie. See above.


...For the youngest patients, who don't get sick often. Older people should run for the hills


This is what the GOP thinks you deserve, peasants!

One group is repeating wonderful benefits from the GOP's AHCA: the large corporations (Hearst, Scripps, and Gray) which, respectively, own Omaha's KETV, KMTV and WOWT.
They're getting tens of thousands of dollars to air the latest barrage of "Social Welfare" disinformation calculated to insulate Republican Don Bacon's icy betrayal of his Omaha and Sarpy County constituents from their red-hot wrath. 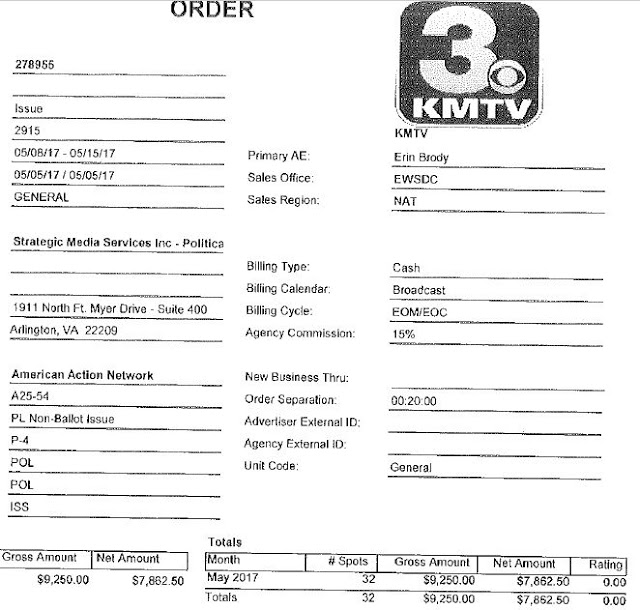