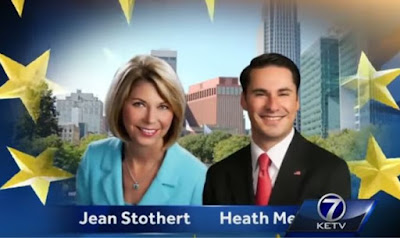 Mayor Stothert, whose actions have proven stunningly indifferent to paycheck-to-paycheck Omahans, has once again prevailed in an Omaha election.
Nothing more starkly illustrated that indifference than when her campaign trotted out Mr. Voter Suppression, Darth Walker, of Wisconsin. Talk about waving a red flag in front of working class voters! But she got away with it.
If Democrat strongholds like District 2 (North Omaha) had voted in the same percentage as West Omaha GOP districts, she might not have.
North Omaha is, of course, a codeword for black people and they richly deserve to be ripped for going AWOL on election day. But they have a lot of company in District 2 — and District 4 — white Anglos and Hispanics by the thousands were just as stupidly apathetic about refusing to exercise the franchise that makes democracy work. Their excuses for not voting remind us of the people who will earnestly and idiotically explain to you why they don't wear their seatbelts.
(Our most dearly cherished fantasy would be a get-out-the-vote ad, aired on election day, with Whoopie Goldberg at 30th & Ames holding a bar chart of voting patterns of district 2 vs. West Omaha districts, and shaking her fist at the camera.)
We here at AKSARBENT have mildly criticized Heath Mello for being slightly off occasionally in respect of our sacred cow, LGBT rights, and even had some fun at his expense in a cutline to a photo of him at the debate last Sunday. But he, and the Democratic Party, especially Jane Kleeb, apparently heard our legitimate criticisms and responded meaningfully.
As for Jean Stothert, she continued her new m.o. of LGBT deception, even during the final debate. (Stothert seems to have evolved, in respect of gays, from arrogant hostility to clever hornswaggling.)
Mello was a good candidate who ran a good campaign and we were lucky he chose to step up to the plate. He didn't let Dems down. Part of his base did, by not showing up to support their champion.