56 days into his presidency, Trump's approval rating sank to 13 points above Nixon's nadir

No president since Gallup started recording presidental approval ratings (during the Truman presidency) has polled as low as this early in their presidencies. Trump, as of March 18 (the 56th day of his presidency) was at 37% (approval) and 58% (disapproval.) Among Jews Gallup says he polls at 31%.
Truman bottomed out at 22%, Nixon at 24% and W at 25%, but each took years to sink that low.
Gallup's HQ is in Princeton, NJ, but polling is conducted from its operations center (below) is in Omaha.
The organization's bread and butter, of course, is market research. One former Gallup employee told me that during a beer survey for a well-known St. Louis brewer (think Clydesdales) he had to ask people what beer they would choose to serve their gay acquaintances. He said the brewer was worried about overmarketing itself at gay day parades and was concerned about the over-the-shoulder perceptions of straights regarding the brand. 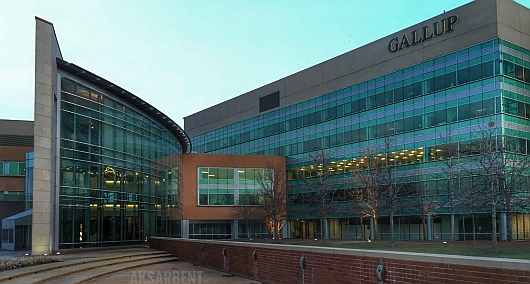