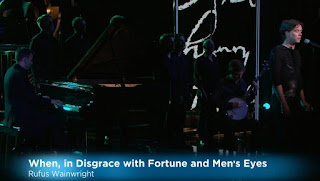 They say that in Italy, the home of the sonnet, rhymes are easier, but Shakespeare made a good account of himself in When in Disgrace with Fortune and Men's Eyes, (#29) which gay performer/composer Rufus Wainwright set to music beautifully (Don't try setting a Shakespeare sonnet to music at home, boys and girls.) and performed in April at the Royal Shakespeare Company's 400th anniversary commemoration of the death of William Shakespeare.
Dame Judy, Sir Ian, Prince Charles, Benedict Cumberbatch and other luminaries performed (yes, Prince Charles had a part in a skit), but we thought Wainwright's stunning performance of his ingenious melody was absolutely, positively, hands-down, the best thing in the show.
Rufus's musician father, Loudon, now deceased, would must have been so very proud of his boy. You can see the whole thing on Great Performances (telecast two days ago on PBS) with Rufus's performance at about the 1:16:45 mark, but the karaoke version below, with the emphasis on Shakespeare's lines, is at least as affecting, if less majestic, without the backup singers and orchestra.
It is Sonnet 20 that is almost universally acknowledged to have been addressed to a young man, but many critics think #29 was, too. If you're skeptical, AKSARBENT invites YOU to argue with Camille Paglia. We're way too chicken.

Fortune and Men's Eyes, which took its name from this sonnet, was a shocking prison drama written in the late 60s by Canadian playwright John Herbert and produced off-Broadway in 1967, just before the greater on-Broadway success of Mart Crowley's The Boys In The Band.
Dustin Hoffman workshopped Fortune and Men's Eyes at the Actor's Studio, with Jon Voight as Smitty, the character raped behind bars, and Don Johnson played the same role in the L.A. version, directed by Sal Mineo. In the film, Wendell Burton (who played Liza Minelli's boyfriend in The Sterile Cuckoo) was Smitty.