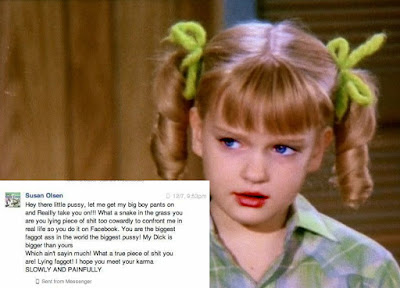 Update: Olsen has been fired from her L.A. radio gig.

Don't let the pigtails fool you. Susan Olsen (aka Cindy Brady) will take you down if you diss her favorite pig, Donald Trump, or her.
Actor-producer-activist Leon Acord-Whiting ripped Olsen for her comments on LA Talk Radio where she has a show called “Two Chicks Talkin’ Politics,” and then on facebook, at which point Olsen emptied her spleen in his general direction with the quote above (Click to enlarge the picture if you can't read the quote.)
Wonkette thinks Mr. and Mrs. Brady should have left Cindy behind when they visited the Grand Canyon.
Posted by Enzo