San Francisco's 'hot cop of the Castro', arrested for felony hit and run last November, has pled not guilty 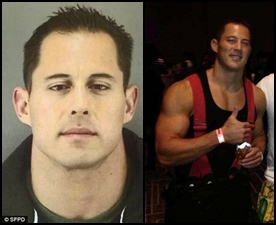 The SFPD faces more texting investigations after five cops were discovered by the District attorney of San Francisco, George Gascon, to have send racist/homophobic texts on their personal cell phones in 2014/15.
Gascon said the texts ‘used the N-word repeatedly and insulted LGBTs, according to the Los Angeles Times.
About a year ago, 2012 cop texts involving 14 officers included calling Blacks "monkeys", encouraging the killing of 'half-breeds'  and various antigay remarks.
As if that weren't enough, in November, Officer Christopher Kohrs, better known virally on the Internet as the "hot cop of San Francisco" or, the "hot cop of the Castro", was arrested.
In December he was charged with two felony hit and run counts after abandoning his orange-and-black 2009 Dodge Charger in North Beach in the wee hours of the morning after hitting two pedestrians. He got out on $100,000 bail and on March 14th, pleaded not guilty.
He didn't turn himself in for hours, so it was impossible for authorities to know his blood alcohol level at the time of his accident.

Kohrs, now on medical leave, was paid just over $195,000 in salary and benefits last year. He is, at least as farm as SFist knows, "heterosexual and single." After his social media fame became intense, the SFPD moved him from his Castro beat to the Haight.