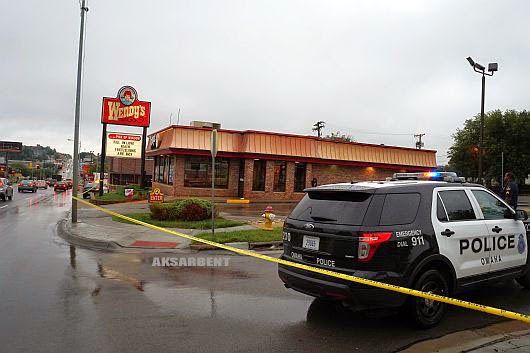 The brother of the soundman for TV's Cops reality show, shot to death on camera last August by Omaha Police during an air gun robbery of a Wendy's, has, with his family, filed a wrongful death suit.
The brother of Trevor Dion, of Haverhill, MA, was Bryce Dion, who was shot in the armhole of a bulletproof vest on the North side of Dodge Street across from the University of Nebraska Medical Center. He died in 20 minutes. The perp was also shot to death. Police bullets were retrieved from the interior of a tanning salon, open at the time, in the next block.
From the Omaha World-Herald:


The officer who fatally shot Dion arrived at the scene after the TV crew and first-responding officers, according to the lawsuit.
"It is not known whether the newly arriving officer was informed that the first officers at the scene were accompanied by a television filming crew deployed in strategic locations to film events as they occurred," the lawsuit said.
Three officers involved were placed on leave while an investigation was conducted and returned to work about three weeks later when Dion's shooting was determined to have been an unforeseeable accident.
The lawsuit also challenges a state law that caps damages against government entities at $1 million, saying it's unconstitutional and that the family seeks more than the cap allows.
Trevor Dion's attorney, David Domina of Omaha, said Dion and his parents decided to sue after the city ignored a tort claim filed last year. 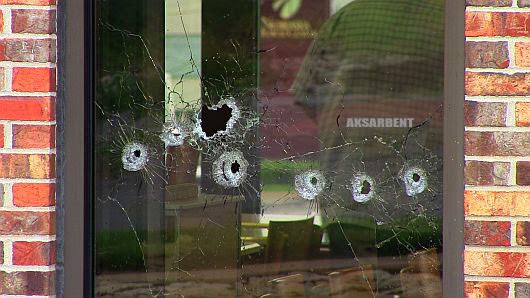 KETV has published a link to the 11-page suit.
AKSARBENT visited the crime scene last August and counted 12 bullet holes near the Wendy's vestibule. The World-Herald said police fired 30 times.

Background:
The ride-along happened because the Omaha Police Department was trying to rehabilitate its reputation after the Police Union posted a child "thug" video meant to generate sympathy for the difficulties of Omaha police. Instead it inspired contempt.
The Kid Thug video was itself an attempt to counteract another viral video which put the Omaha police in a bad light nationally after they stormed a house over parking infractions, knocking over a wheelchair-bound woman in their pursuit of the cellphone used to record them.
They got it and destroyed (or hid) its memory card, but missed another video surreptitiously taken from the second story window of the house across the street.
The Cops ride-along PR backfired even more spectacularly than the others.
The Omaha Police Department's killing of Dion was covered by the L.A. Times, TMZ, The New York Times, NBC, CBS, Fox and ABC, as well as hundreds of other news outlets the world over.
Posted by Enzo