The Louisville Courier-Journal reports that James Yates and Will Smith on Friday asked Rowan County Attorney Cecil Watkins to prosecute Davis for official misconduct due to her recent refusal to issue ANY marriage licenses, a request he referred to Attorney General Jack Conway’s office because Watkins is defending two suits filed against the county. Also:


A motion was filed Tuesday, asking U.S. District Judge David Bunning to hold Davis in contempt. Bunning scheduled a contempt hearing for 11 a.m. Thursday in Ashland. At that time, the gay couples will have to present evidence, which could include testimony from Davis herself. Bunning would then decide on punishment. That could include fines, jail time or both, but the motion asks the judge

Below, a second couple, David Moore and David Ermold, whose marriage license application also was rejected a fourth time this morning by Kim Davis' office, demand that Davis issue them a marriage license. 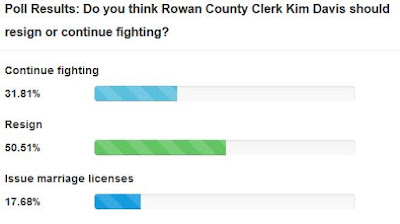 Public opinion, according to WKYT's nonscientific poll, is not running in favor of County Clerk Kim Davis, the devout traditional marriage advocate who has been married four times.