Yesterday on Fresh Air, Terri Gross asked Chris Rock about vaguely mocking gay men in his new movie and mentioned gay-bashing in comedy, at which point Rock insisted that she name two current examples — after saying that he was probably the only black comedian who "hasn't gay-bashed ever."
Gross punted when pressed, but below the transcript excerpt are some examples for her in case someone tries to corner her again on the issue.


GROSS: I don't want to give away too much, but there is a woman in a relationship with a guy she doesn't realize is gay, even though the thing he likes best is anal stimulation...
ROCK: Right - which doesn't make you gay, by the way.
GROSS: ...Which doesn't make you gay. And I'm trying to keep this all radio-friendly.
ROCK: Right.
GROSS: So there's a few graphic jokes that I can't describe on the radio.
ROCK: Right, right, right.
GROSS: And one that ends up being kind of cruel, even though it's played for comedy - and let me explain what made me uncomfortable. There's still so many people who think that gay male sex is icky or disgusting. And I'm afraid that this is possibly a way of mocking gay sex without it being gay sex because it's a woman who's doing the stimulation.
ROCK: Right. 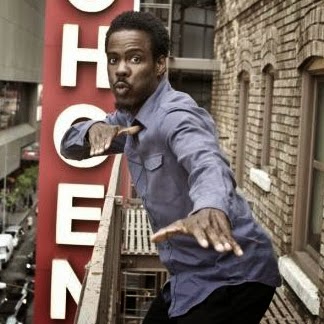 GROSS: I thought this had the potential of playing into that pre-existing phobia and having people laugh on a different level - you know what I mean? - on a level of, like, oh, ick. That's really disgusting, and gay men do that, too.
ROCK: I'm going to say about four or five women told me similar stories.
GROSS: Really?
ROCK: Yeah. And, yeah, that's how jokes happen. It's never like one person or two. It's like you got to hear it a few times when you do stuff like that, or else, you know, you're just being mean. So I'd heard stories about stuff like this. And I don't know. That's all - that's all I got. I don't think - I - you know, I - you know, I feel your pain, but I've never thought about any joke or anything like that deeply.
GROSS: Do you think I'm overreacting?
ROCK: I mean, you're Terry Gross. So, I mean, it's your job to analyze this and, you know, fight the good fight and - you know. But, you know, it's - I'm probably - I'm the only - I might be the only black comedian the country that hasn't gay-bashed ever.
GROSS: Well, that's the thing. I...
ROCK: (Laughter). I...
GROSS: No, but that's the thing. I admire you for not doing that. But...
ROCK: I'm like - like, ever - like, like, ever. I'm...
GROSS: People are so used to gay bashing jokes in comedy. It's such a common thing. I think that's why...
ROCK: It's not a common thing. It's like...
GROSS: Gay bashing and comedy?
ROCK: It's - name two comedians that do it right now.
GROSS: Oh, I've heard so many jokes.
ROCK: Give me two.
GROSS: Oh, I'm not good at remembering things.
ROCK: If somebody asked you - you say something happens all the time. And then somebody says, give me two - they didn't say, give me 10; they said, give me two...
GROSS: No. OK, I will refer you to...

(Go here to hear the entire exchange and the complete interview.)


Oh gee, are there any gay-hostile comedians? MMM, how about Victoria Jackson:


This new al-Qaida magazine for women has beauty tips and suicide-bomber tips! Gimme a break! That is as ridiculous as two men kissing on the mouth! And I don’t care what is politically correct. Everyone knows that two men on a wedding cake is a comedy skit, not an “alternate lifestyle”! There I said it! Ridiculous!
Did you see “Glee” this week? Sickening! And, besides shoving the gay thing down our throats, they made a mockery of Christians – again! I wonder what their agenda is? Hey, producers of “Glee” – what’s your agenda? One-way tolerance?

Or Adam Corolla. Or Tracy Morgan. Or Joe Koy. Or Norm McDonald.
Or Larry The Cable Guy, aka Daniel Lawrence Whitney who poses as a Southern Redneck in his Prilosec ads but who lives near Lincoln, Nebraska and whose Dixie drawl is about as pronounced offstage as those of fellow Nebraskans Johnny Carson, Dick Cavett or Henry Fonda.
Incidentally, Whitney doesn't suffer bigger fools than himself gladly:

...if I did a joke about an animal righter or railed on Kerry or told a joke about Rosie O'Donnell gettin' kicked in the nuts these same sum-bitches'd be protestin' in the streets cryin' bigot and homophobe and cryin' like a Retard trippin' on marbles!