KETV reports that GOP Gov. Dave Heineman, who has been relentlessly hostile to gay equal rights will "not take a pass" on the lawsuit, which the American Civil Liberties Union of Nebraska plans to file next week.
News of  the suit was leaked to the Omaha World-Herald yesterday.
The state's GOP governor-elect, TD Ameritrade scion Pete Ricketts, vowed after his election to fight marriage equality in the Cornhusker state.
The state's lame duck Attorney General, John Bruning, who became a multi-millionaire while in office is no prize either. But at least he thinks that heteros don't have the right to get divorced either.
Fun fact: The Nebraska State Capitol, as pictured below in a whacked painting which adorned a P.O. Pears wall in Lincoln for years, is probably the most phallic government building in the world — unless there is another edifice somewhere with a 400-foot shaft with a bulbous tip on top of which a sower depicted flinging his seed in the general direction of 'O' Street.
Novelist Ernest Hemingway once called the building "the penis of the plains" in a lecture at UNL.
Film critic Andrew Sarris, also struck by the blatant phallic-ness of the Nebraska's capitol (designed by Bertram Goodhue, who also designed the Cheltenham typface), told a film study class in the 80s, that if Rainer Fassbinder ever came to Lincoln, he would probably photograph the capitol from a circling helicopter. 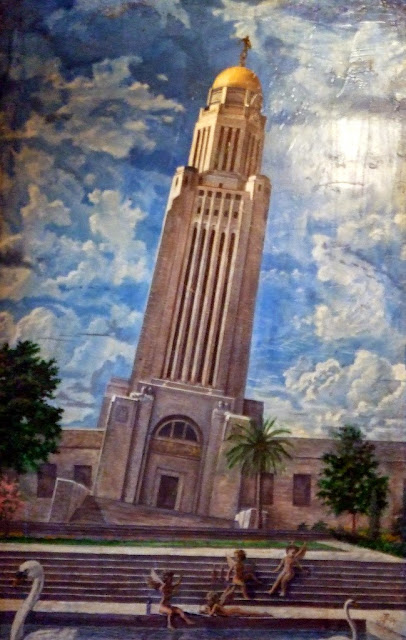