Related:
AKSARBENT went to the first event of Gay Pride Weekend Thursday, the one fancifully called the Harvey Milk Candlelight Vigil in Stinson Park, put on by Heartland Pride. It was much more a revival meeting led by Christ hustlers than it was a remembrance of Milk. (You may already have guessed that AKSARBENT's bent is toward the agnostic.) 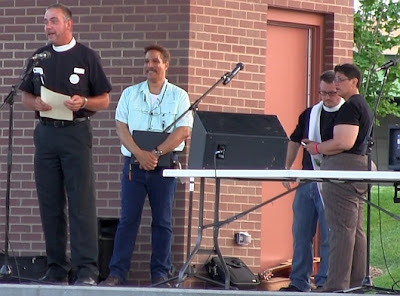 Heartland Pride's website promised: "There will be speeches by local leaders in the community."
(Emphasis added.)
All three community leaders turned out to be preachers, at least one of whom was not a member of the gay community, and all of whom hammered home a gay spin on Christianity, the invisible Christian God, and the Christian Bible.
AKSARBENT cannot begin to tell you how fortunate it felt to be breathlessly lectured to about the revelatory discoveries a straight preacher made regarding the rational underpinnings of gay rights when he was in college — stuff we knew at age 16. Paraphrased example: "Straights say homosexuals choose their orientation but none of them can say when THEY chose to be straight."
Wow — heavy! Johnny-come-lately insight into the heterosexual double standard! Pass the bong, man!
Evidently, the trio thought selling religion hard, as solace, would work to a crowd often jerked around by (religious) homophobes. (Hey kids: Christianity is the solution to the problem of Christianity!)
As for dearly departed Harvey Milk, not once did we hear any of the Stinson Park Holy Trinity speak his name and neither did anyone we were with. (If we missed an acknowledgement, it must have been spectacularly perfunctory.)

As do homophobes on the flip side of the Christer coin, the trio associated righteousness, love, concern for humanity, etc. with their god and their religion, with the clear insinuation that said faith is the only font of such traits worth mentioning and perhaps even the patent-holder on such behavior.
Anyone who expected to find much philosophical diversity among the speakers in Stinson Park yesterday was barking up the wrong tree — not that there are many at that venue under which one might seek shade on a hot day.
If yesterday's production was Beth Rigatuso's twisted idea of a paean to Harvey Milk — hijacking the legacy of a gay rights icon known neither for piety nor religiosity and repurposing that legacy to push those ends — then we'll give future Heartland Pride "tributes" a miss.
One thing Heartland Pride did right was its fantastically well-executed map of the Council Bluffs parade route. We love a good map here at AKSARBENT and whoever "KRC" is, she, he or it did a great job of producing an attractive model of color-coordinated clarity. Kudos.
Perhaps Heartland Pride should stick to maps and not force-fed religion via speaker after speaker after speaker to a community in which agnosticism/atheism rates are almost three times that of the general population and in which 48% choose not to be affiliated with any religion at all.
Posted by Enzo