David Nelson, Ricky's big brother, dies in L.A.; was last surviving star of 'The Adventures of Ozzie and Harriet'


David Nelson, last surviving star of "The Adventures of Ozzie and Harriet," the longest-running live-action situation comedy in the history of American television, died Tuesday at home in Century City of complications from colon cancer at age 74.
Though overshadowed by his pop star brother, Ricky, David himself acted in movies such as "Peyton Place" and "The Big Circus" and was accomplished enough as a trapeze artist to have performed professionally.
Nelson's nephew Matthew, whose father Ricky died in a DC-3 airplane crash on the last day of 1985 while touring, recounted to Randy Lewis of the L.A. Times his uncle's dedication to the Nelson family. 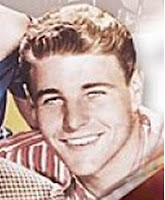 When my dad died, it happened so suddenly, but through his own grief David managed not only to take care of my grandmother (Harriet) - and it was just horrible for her - but he really protected Rick's kids," Matthew Nelson, 43, said Wednesday from aboard the cruise ship on which he and Gunnar are performing a show that pays tribute to their father's life and career. By extension, it also highlights David's role in the family.

"David was the executor of the estate, and frankly the estate was really a mess at the time because of all kinds of things: divorce, debt, so many different things. It took a long time, and it was a long struggle for him to straighten things out," Matthew said.

"I really got to see what kind of character he had when my father passed away," Matthew said. "He was the guy that stepped up to the plate and said, 'I'm going to do this for my brother and for his kids.' I'll always thank him for that."

Nelson's final acting credit was as the father of Wanda ( Traci Lords) in "Cry-Baby," writer-director John Waters' spoof of the '50s.
David Nelson is survived by his wife, Yvonne; sons John, Eric, James and Danny; daughter Teri; and seven grandchildren. Nelson's marriage to June Blair, with whom he had two sons, ended in divorce in 1975.
Posted by Enzo