The National Organization for Marriage, which spent $600,000 in an Iowa partnership with Bob Vander Plaats to recall three of the state's supreme court justices, has been thumbing its nose at campaign disclosure regulations in Maine, Minnesota, and several other states with the help of Attorney James Bopp, who helped litigate the Citizens United case.
Last week NOM and Vander Plaats staged a rally in Des Moines to call attention to their ongoing campaign to ban gay marriage, civil unions and domestic partnerships in Iowa.
Yesterday Maine unsealed internal NOM communiques that were uncovered as part of Maine's investigation into NOM's finances, and the Human Rights Campaign got copies of them.
(To maintain the illusion that it is a grassroots-funded organization, NOM fights campaign disclosure regulations at every turn, but its most recent IRS Form 990 (2010) tells the real story: from its revenue that year — $9,197,742 — a whopping 69.1% came from just two undisclosed donors and 88.1% came from five undisclosed donors.) 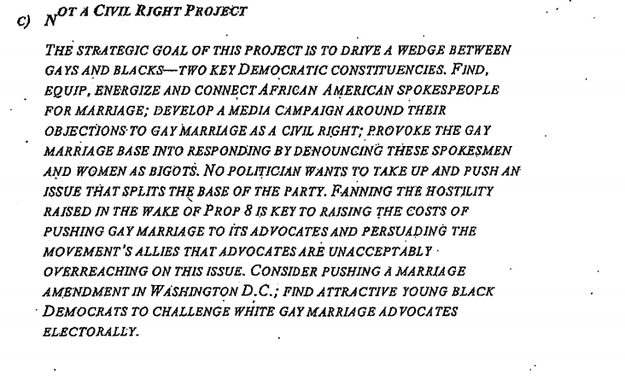 
A spokesman for Human Rights Campaign, which has battled NOM tooth and nail for several years, said the documents showed a darker side of the conservative organization.
"Nothing beats hearing from the horse’s mouth exactly how callous and extremist this group really is," said HRC's Campaign Media Director, Kevin Nix.
The documents also makes clear that NOM's plans include the 2012 election.
In a "$20 million strategy for victory" keyed to the 2010 midterm elections, the group says its agenda "requires defeating the pro-gay Obama agenda."
"A pro-marriage president must be elected in 2012," the document says, although Obama has offered tepid opposition to same-sex marriage.
The same document, an update to the group's board, described a $1 million plan through the conservative American Principles Project to "expose Obama as a social radical."
The section, headed "Sideswiping Obama," suggests raising "side issues" including pornography to attack Democrats' flanks.
The group also sought to identify "victims" of same-sex marriage — children raised in gay households — and in another document budgeted $120,000 to locate "children of gay parents willing to speak on camera."

To see how, according to John Aravosis, "Mormans bashed gays in Nebraska, too" go here.
From Fred Karger's website, Mormongate.com:

Who created the National Organization for Marriage?
The Mormon Church appears to have created the National Organization for Marriage (NOM) in the summer of 2007 to qualify California’s Proposition 8 for the November 2008 ballot. They set it up as a Mormon front group, exactly as they did with a very similar organization called Hawaii’s Future Today (HFT) in that state in 1995. HFT was established to pass a constitutional amendment in Hawaii to ban same-sex marriage. Sound familiar? They have now expanded NOM into seven more states, specifically to fight same-sex marriage in those states.
We are posting official Mormon Church documents on this web site, dealing with significant Mormon Church actives in Hawaii. These documents show just how the Church operates and they illuminate the replication of the strategy in California in creating NOM to qualify and pass Proposition 8.

NOM Board of Directors

Maggie Gallagher
President of NOM, Westchester, NY
Outspoken and Longtime Opponent of Same-sex Marriage, President of Institute for Marriage and Public Policy,
NOM Board of Directors