ALSO: Homophobic NE AG Don Peterson is denied an en banc hearing he requested in order to deprive a dying woman legal fees after she was forced to sue the state to recognize her legal same sex marriage. 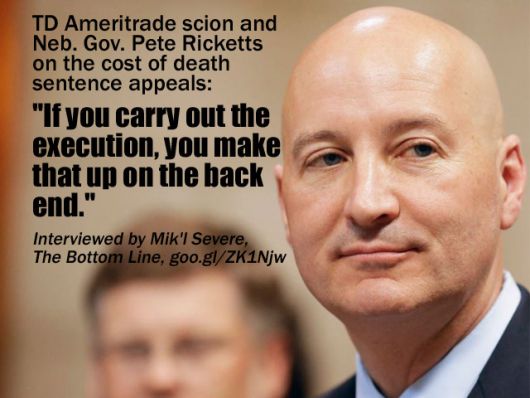 
“The U.S. Supreme Court has spoken and ruled state same-sex marriage bans to be unconstitutional. While 70 percent of Nebraskans approved our amendment to our state constitution that defined marriage as only between a man and a woman, the highest court in the land has ruled states cannot place limits on marriage between same-sex couples. We will follow the law and respect the ruling outlined by the court.”

The first lie was the assertion that 70% of Nebraskans disapproved of gay marriage. The actual figure, of course, was 70% of the people who went to the polls in 2000 to vote on the issue. Ricketts' second lie was his pledge to follow the law and respect the ruling.
From today's Omaha World-Herald:


The Nebraska chapter of the American Civil Liberties Union asked a Nebraska federal judge on Thursday to issue an injunction ordering the state to list both same-sex spouses as parents on birth certificates of children born to same-sex couples.

The request is being reviewed by the Nebraska Attorney General's office.