Although the Wiki page of HBO's popular political commenter, John Oliver, describes him (as of 2010, at least) as married to wife Kate Norley, an Iraq War veteran who served as a US Army medic, you shouldn't take that as gospel, as Wiki is rife with error.
You could instead (especially if you're a Nebraska Republican) take the crude speculation of LeavenworthSt blog's founder, Streetsweeper (AKA Jerry Kratochvil) about Oliver's real sexual proclivities.
Naturally, we at AKSARBENT don't take any of this snarky, contempt-speech personally. We've been called worse by better looking guys than Kratochvil at any number of gay bars. Details more or less similar to this.
Maybe Jerry (an Omaha expat who covers right wing machinations here in River City from his home in Overland Park, Kansas) is planning a run at (no homo) Pat McPherson to relieve him of his seat on the State Board of Education and is therefore just giving his readers (if not the advertisers he now courts) what they really want.
Well, except for his closeted, self-hating readers, but their silence in the face of a gratuitous slur or two is all part of the conservative game, isn't it?
Remember, kids, Pat McPherson also ran a homophobic blog popular among Cornhusker cons and look where he is now! 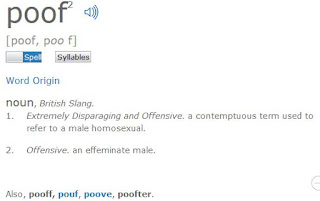 Update: Below is the twitter exchange which followed the publication of the above post (now expanded and revised), for your edification, dear readers:

The above is what condescending, laid-back antagonists do when their animus occasionally bubbles to the surface, and someone actually calls them on it. A guide:


1) They disown said animus and insist that their target owns it (i.e., straight epithets are really gay slang!)
2) They suavely imply that it's all beneath them (Well, I'm not really up on these new, hip slurs that have been around since before I was born! Maybe I mistook them for terms of grudging affection? Kids today!)
3) They sportingly (or snidely) congratulate the person (Congrats!) who noticed what they wrote at their own damn leisure, as if graciously acknowledging a gotcha at a debate.
4) Finally, they blame someone else (like cretinous 90s GOP hipster P.J. O'Rourke) by citing their use of said slur as if that confers any legitimacy at all. (As in: Oh, you want ME to actually check the meanings of smears I borrow to make sure they're not class-based insults? This is liberal PC run amok!)

Email ThisBlogThis!Share to TwitterShare to FacebookShare to Pinterest
Labels: the