Woodhouse Ford will match your contribution to a college that kicks out gay women, ransoms their transcripts and seeks thousands in repayment for the semester they 'withdrew' 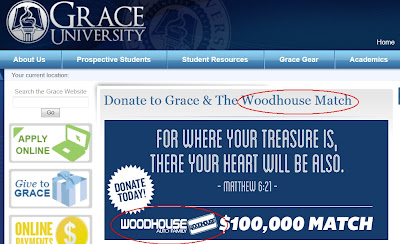 Backing Grace University is creepy, but it isn't the only creepy thing Nebraska's biggest Ford Dealer does.
Remember Queen for a Day, back in the 50s?
Of course you don't, you're too young. Even AKSARBENT is too young, for Christ's sake.
Queen for a Day was a cruel television sob sister spectacle of hard-luck housewives who competed for prizes, like washers or dryers, which they would win by a vote of the audience for the most pathetic story.
Guess what? That's rather like what Woodhouse Ford does in the 21st Century!
They retail poverty in a prize parade that truck buyers and the public get to vote on.
They let viewers voyeuristically click Internet ballots for the MOST DESERVING of the poors.
Everybody wins — Woodhouse gets business from beating the ad drums and probably harvests a pantload of demographic tracking data on all the suckers who clicked. Voters get to feel good about themselves, and some of the um, "less fortunate" GET NEW CARS!!!!!
Ooops, guess not everybody wins... Some of the "contestants" don't get the car even after surrendering their dignity on the commercial altar of one of the nation's (not just Nebraska's) biggest Ford franchises. (Not to imply that poor people are the only ones robbed of their dignity by television, a fact reinforced every time Donald Trump sneers into a lens, although to be fair, Donald Trump never had any dignity to begin with. Or hair.)
Beyond all that is the revolting reality that Woodhouse funds Grace College as it jerks around and humiliates a gay student, "interviews" her acquaintances (like the military used to do during witch hunts), outs her to her family, refuses to release a usable transcript for her, just a worthless, unofficial "student" copy (according to Danielle Powell), though Grace University's Executive Vice President Michael James claimed otherwise to the Omaha World-Herald.
Why, all this makes AKSARBENT nostalgic for the day, some years ago, when we bought our new Ford — at Atchley.

Below: Danielle Powell, expelled from Grace College, proposing to her now-wife (they're Iowa-married) Michelle Rogers at Sokol hall on South 13th at a Macklemore concert in in December 2012. Rogers has started a change.org petition to persuade Grace University to cancel the amount it is billing her wife.

Below, some signs/omens from the universe, which has been trying its best to discretely tell gay people not to go to college at Grace University, in Omaha. AKSARBENT drove over yesterday, took pictures, (well, the first two) and even annotated them with digital crop circles, so to speak. Pay attention gay peeps.