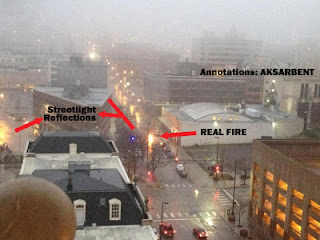 Gawker claimed the "photo showed "pillars of fire bursting from downtown Omaha" and 50,000 of its readers clicked on the picture.
One-and-a-half million people saw the photo on Reddit.
But no one was claiming ownership, so Matthew Hansen at the World-Herald decided to find out who actually took the picture:


I have a bachelor's degree in journalism from a slightly above-average public university.
I'm clearly qualified for most everything.
Why don't I figure this out? Why don't I solve the lingering mystery of the Great Omaha Manhole Fire Photo of 2013?
The ensuing city-wide manhunt took me an entire morning and involved several maneuvers that can best be described as quasi-stalkerish.
It included a man named Kenneth who wore no pants, a lawyer named Gwen who works in my own office building and a lot of purposeful staring at a fuzzy, blown-up iPhone image as if it were a modern-day Zapruder film.

Turns out that the photographer (who took more than one cell phone photo of the Howard Street scene) was a 23-year-old graduate student at Creighton and that the appearance of multiple fires was an optical illusion, albeit a naturally-occurring one unabetted by Photoshop, but encouraged by the way iPhones evidently see the world.
Alas, AKSARBENT was fooled too.
There's a lesson in all this and the lesson is: if you're lounging around in what you thought was your rented castle in only your shorts and a redhead-on-a-mission from the World-Herald bangs on your door, don't open it even a little, unless you want to be defined for the world as "Pantsless Kenneth."
Go here to see Stephanie Sands talk to KMTV about her viral photo.
Posted by Enzo