Tucker Carlson just ripped Ben Sasse apart, directly and maybe in between the lines too, on his Fox show

Update: Senator Sasse and Elliott Management have responded to Carlson's piece;
he found their answers lacking. 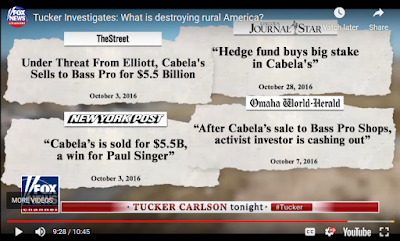 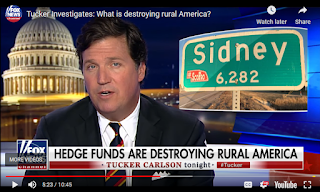 Pete Ricketts and Don Bacon both took money from vulture capitalist Paul Singer, whose firm, Elliott Management destroyed Cabela's and devastated Sidney, Nebraska.
Tucker Carlson just did a piece about this on his Fox show:


"One of the last thriving small towns in this country went under. We recently sent 2 producers to Sidney, NE to survey the wreckage there and to consider what happened. Our producers talked to more than a dozen former employees. Almost all of them refused to speak to us on camera, fearful of legal retribution from the famously vicious Paul Singer. But off-camera, they told us their story..."

After the segment, Carlson did an interesting thing. Behind him, he put up a picture of Senator Ben Sasse (If you're in third grade and reading this, say Ben Sasse 3 times, quickly). Then Tucker looked into the camera and said this:


As we were doing that story, we were warned repeatedly by people around Washington, "Don't criticize Paul Singer. That's not a good idea," and as that package played I got a text from a very well known person in Washington: "Holy smokes! I can't believe you're doing this. I'm afraid of Paul Singer." 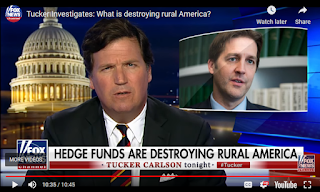 Blind item! If you have any idea who Carlson may have been talking about, tweet us at @aksarbent, won't you?
Anyway, then Carlson continued, as the picture of Sasse stayed up behind him.


"You might think that the death of a town in his state might be of concern to Ben Sasse, again, U.S. Senator from Nebraska. But so far, it doesn't seem like he's ever commented on what's happened to Sydney. We looked hard. Then we called Sasse's office to see if they could point to a time when he commented on the destruction of Sydney or simply supply a statement to us about what happened there. But Ben Sasse's office didn't even respond to our producers. Huh! That's odd. But then, here's one possible explanation for that: During his senate run, Ben Sasse received the largest possible donation from Paul Singer."