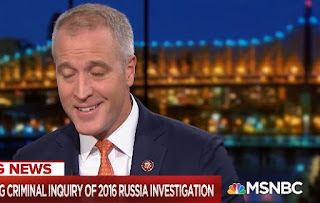 Rachel Maddow talked to Rep. Sean Patrick Maloney Thursday. (Fun fact about Maloney: he was raised with his six siblings in what he describes as a "small Irish Catholic family.") Here's how he described GOP members storming a closed  impeachment inquiry hearing room (with prohibited cell phones).


The circus came to town in a space usually reserved for serious work... They let the yahoos in. I mean Steve King, who they've kicked off every other committee because he's a racist. Remember that? He was in the room, so is it their position that now they want Steve King involved, that it's not enough that 45 of their members have every right to be there for every deposition, that their lawyers get equal time, that their members get equal time, and of course the funny part is that very few of them have taken advantage of that because apparently they don't want to do the actual work... Ask yourself why no facts favorable to the president have leaked from the other side.