Dave Chapelle is probably more homophobic
than Mark Twain or JFK, but the Kennedy Center
just gave him a prize anyway

At the doings mentioned above, Chappelle, humbly blowing cigarette smoke from the stage, accepted his trophy, bravely steadfast against those killjoys who won't praise clever homophobic jerkwads like himself.
Unlike Nancy Pelosi and Adam Schift, Mark Twain did not attend the love fest because the rumors of his death are no longer rumors.
America's cleverest gay basher is an odd choice for an award given in a building named for John F. Kennedy whose lifelong best friend, Lem Billings, was gay.
As for Twain, he may well have had liaisons with other men in the mining camps and newspaper offices of the early 1860s American West.


The argument, as restated by telephone Thursday by Andy Hoffman, 37, a visiting scholar at Brown University who is working on a Twain biography, is this: During Twain's Western years — primarily between 1861 and 1866 — he developed strong friendships with men such as fellow journalists Dan De Quille and Clement Rice.
In both cases, the friendships ended abruptly and acrimoniously — resembling romances scorned. "It seemed to me they had passionate endings because they were passionate relationships," Hoffman said. (Twain came East permanently in 1868, married Olivia Langdon in 1870 and moved to Hartford in 1871.)
Western humorist Artemus Ward, who Hoffman says was homosexual, once wrote a letter to Twain that opened, "My dearest love ..." 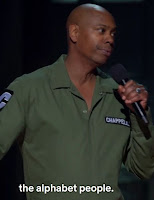 "Whether it's simply a joke or whether it is more significant about the nature of the relationship is anyone's guess. My guess is that it's more about the nature of the relationship," Hoffman said.
In a newspaper squib a few weeks before Twain left Virginia City for San Francisco, he wrote: "Dan De Quille and Mark Twain are to be married shortly. About time." "Which seems kind of blatant, even for frontier humor," Hoffman observed.
In addition, Twain's San Francisco crowd included a group of writers who called themselves the Bohemians. They were, Hoffman said, quite tolerant of homosexual and bisexual behavior. [The male/female ratio in San Francisco in 1860 was 158/100; and most women were married — AKSARBENT] 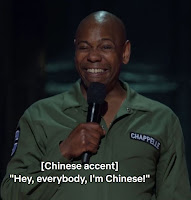 We note the above not because we care a fig about casting Samuel Clemons as gay, bisexual, or Adventurous When Drunk, but rather to contrast his lack of interest — as opposed to Herr Chappelle — in flinging invective at LGBTs. 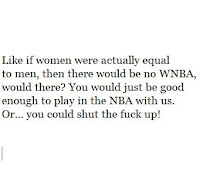 In Chappelle's current streaming Netflix special, "Sticks and Stones," he claims that he loves everybody and everybody loves him (just like Anita Bryant!) before going on to shout FAGGOT into his mic twice, mock the looks of Chinese Americans, pronounce 36-year-old women beyond their expiration date and tell feminists they're not going about their mission correctly. 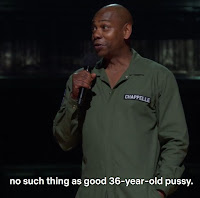 He indulges in enough self-pity to allow that the "T" component of the "alphabet people" hate his guts, which sounds plausible, and only ungrateful if you buy Chappelle's assertion that he ran his trans jokes past a genuine transexual, and that she "was laughing hardest" at them. (You have to take Chappelle's word for it, because Daphne Dornan committed suicide earlier this month in San Francisco.)
Just because you're funny doesn't mean you're not an asshole, and disingenuously nailing yourself to the cross of blowback from being a dick, don't, as Shania Twain says, impress us much.
There are a million ways to mine humor from the existence of LGBTs without impersonating a rattlesnake, but Chapelle seems not to know any of them. His pick ax is for grinding, not for digging for better ways to be funny.
Maybe he should watch an old episode of Friends, which was more woke about these things decades ago than Dave Chappelle shows any promise of ever being.

More about Twain from playwright Larry Kramer in The Guardian:


“Most histories are written by straight people who wouldn’t know, see the signs that a gay person does when they look at a person’s life,” Kramer said. “I mean, how could you write the life of Mark Twain without realising that he was hugely, hugely gay? The way he lived, who his friends were, and how his relationships began. And what he wrote about! I don’t know how you could avoid the assumption that he’s gay.” (Kramer is not the first to raise this possibility, but it is not a view accepted by most Twain scholars.)