Ken Burns didn't acknowledge any LGBT stars in his histories of Baseball, Jazz, or, so far, in Country Music. The closest he has come was in an anecdote last night about Faron Young and Willie Nelson, who was always critically short of money in his early years. From Country Music:


"I hawked my guitar so many times," he said later, the pawnbroker played it better than I did. Once, strapped for cash, he sold his writing credit on two songs for only $200, giving up all future royalties. One of them, "Family Bible," became an immediate hit on country radio when someone else recorded it. The other, "Night Life," would later go on to sell 30 million records. In Nashville, Nelson offered to sell country star Faron Young his writing credit to "Hello Walls" for just $500.

Faron, not the wheeler-dealer sharpie that other country stars like Gene Autrey or Buck Owens were, instead offered Nelson a $500 loan if he promised not to sell the song to anyone else, and let him keep the rights. 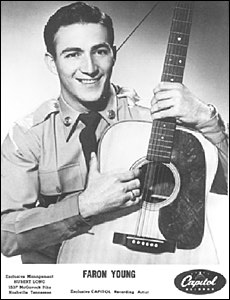 Young's recording topped the country charts, then became a top 20 pop hit, and soon was covered by Perry Como, Lawrence Welk, and Willie Nelson's hero, Ernest Tubb. When his first royalty check arrived — for $14,000 — Nelson found Faron Young at Tootsie's and in front of everyone, gave Faron Young a big kiss, square on the lips. "I ain't never had nobody, Young said, "kiss me that good in my life."