Cosmo Jarvis shows you how to play the Gay Pirate Song

UK film actor Cosmo Jarvis has performed his "Gay Pirates" song for about 10 years, It is known virally (about 2.5 million YouTube views) in large part because Steven Fry jump started its spread by  tweeting an early video performance. We were going to embed the youtube-unlisted Amsterdam Version (collect them all!) but the one at the bottom of this post is better. 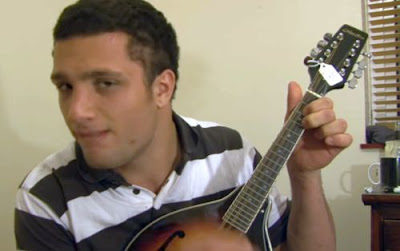 There's a 2012 full-costume theatrical extended version, also unlisted on Jarvis's  channel (He reputedly got tired of people asking if he is gay, which he isn't.)
BBC Radio 1 refused to play the song due to the term 'gang-rape’. But Radio 4 and 6 had no issues, letting him play it live.
Jarvis also posted a tutorial on how to play the song, (you'll need a mandolin) in which he briefly takes a time out to show you his air rifle and is distracted when he spots forgotten money in his room. "Oh, a quid!" But the chords are there, pickers.